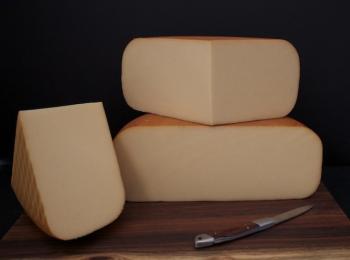 Located in Monroe, WI, Maple Leaf Cheese was founded as a co-operative in 1910 by a group of local family farmers wishing to establish a consistent, trustworthy market for their milk. Today, three generations later, Maple leaf is still farmer-owned, by many of the same families that helped establish it one hundred years ago. Cheesemaking takes place under the guidance of Jeff Wideman and Paul Reigle, both Wisconsin Master Cheesemakers. A variety of cheeses are produced at Maple Leaf including their renowned Smoked Gouda. According to Jeff Wideman, the inspiration for this cheese dates back to 1982 when he was searching for additional styles of cheese to add to his range, thereby helping to benefit the co-operative members and milk suppliers. Mapleleaf has collaborated with the same smoke house in nearby Evansville since 1982. The cheeses, which are smoked over hickory chips, are sent for smoking at about one week of age. The process is a delicat