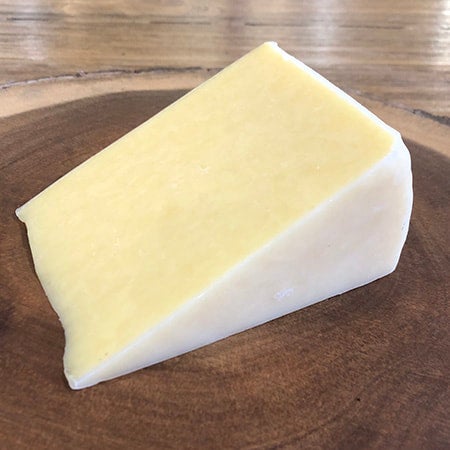 100% Cow’s Milk; Long Aged; Made in Ireland. One half-pound wedge. Cahill’s Whiskey Cheese is produced by Cahill’s farm in Limerick, Ireland. Records of making cheese go back to 1902 when David Cahill started the business. It is made using pasteurized sheep’s and cow’s milk mixed with Kilbeggan Irish Whiskey sourced from the Cooley distillery in Co. Louth. After the curd is formed and whey is drained off, the whiskey is added which gives the cheese a mottled, golden hue. Actually, it is a simple vintage cheddar cheese but with a blend of Kilbeggan whiskey. This yellow waxed gourmet cheese is matured for a minimum of nine months. Beneath the waxed rind, one can clearly distinguish between curd and whiskey. The taste of the cheese is smooth and rich without the whiskey overwhelming the milky flavors. Enjoy the cheese with fruit or sandwich.